Why you should track your spending (and why Quicken sucks)

Last year wasn’t good for me. Depression and anxiety reigned supreme. By objective standards, my life was pretty good. But subjectively, life sucked. Going into 2020, I decided I needed to make some changes. I’m pleased to report that the first five weeks of the year have gone swimmingly. Life is grand.

I’ve made three specific changes that I believe have contributed to this improvement:

Taken together, these three changes have mitigated my mental health problems and made me more productive. I love it. Over the next six weeks, I plan to integrate two additional changes into my life: I’m going to begin exercising regularly and I’m going to cut back on videogames. I expect this to provide an additional boost to my well-being.

There’s been an unexpected benefit to my quest to become a better version of me. January was — by far — my best month with money in years.

As you know, I track every penny I spend. I’ve been doing this since 1993 (with occasional breaks). It’s a valuable practice.

Earlier this decade — after my divorce but before my RV trip — my monthly spending averaged about $4000. After returning from our cross-country adventure, that number spiked. From 2016 to 2018, I was spending closer to $6000 per month. This led me to push for austerity measures last year, measures that worked. My 2019 spending averaged $4221.27 per month.

In January, I spent $3212.24. This is a fist-pumpingly fine number, one that I’m proud of. But I’m even prouder of how I achieved those cuts. My top financial goal for this year is to spend less on food. I did that. And because I didn’t drink, I spent nothing on alcohol.

Because I was curious, I decided to explore my spending over the past few years. I think you might find it interesting too. Here’s a snapshot: 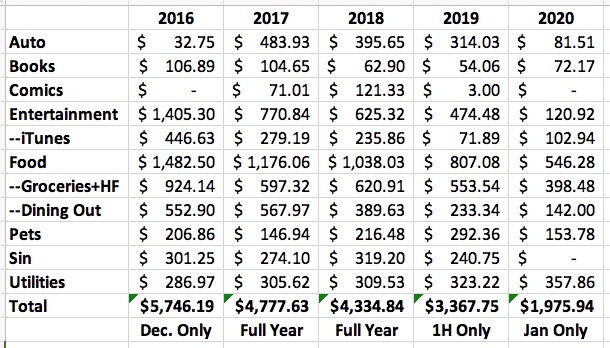 I know I’ll spend more in February than I did in January. Our theater tickets renew and that’s a $1500 expense, for instance. Still, I expect that I’ll continue this trend toward reduced spending, and I’m glad. It makes me happy. It’s yet another way that 2020 is off to a better start than 2019.

Why It’s Important to Track Your Spending

It might seem strange that I’m such a vocal advocate of expense tracking. After all, don’t I have all of the money I need? I do. But I think part of the reason I keep that money is because I’m so vigilant with my spending.

In fact, this seems to be a key habit with most wealthy people I know. They keep tabs on where there money goes. In The Millionaire Next Door, the authors write that the three words that best describe the wealthy are “FRUGAL FRUGAL FRUGAL”. They also point out that most millionaires keep budgets.

Tracking your spending demystifies money. You begin to perceive it as a tool. You gain a sense of power; you no longer feel that money controls you, but that you control money. Your awareness of your money habits is heightened, allowing you to make changes to improve your situation. You begin to understand how your one-DVD-a-week habit affects other parts of you your life.

When you track your spending, it’s important not to make judgments in the moment. This activity is meant to describe your money habits, not to change them. (You probably do want to change them, of course, but that’s a different task.)

To make it easier to track your spending, remember the following:

Expense tracking paints a picture of your spending habits as they actually exist – not as you think they exist. You can use this information to build a budget and to set financial goals. At the very least, you’ll get a snapshot of where your money has been going. Without doing this, it’s difficult to know how much you’ve really been spending – and what you’ve been spending it on.

Plus, if you’re a money nerd like me, it’s fun to track your spending. I love putting the numbers in by hand, then looking at the data with different graphs and reports.

How to Track Your Spending (and a Rant)

During the 1990s and 2000s, it was easy for a curious person to track her spending. There were a variety of tools she could use: Quicken, Microsoft Money, Andrew Tobias’ Managing Your Money. Nowadays, though, your pickings are slim.

Yes, I know there are all sorts of apps out there that purport to track your spending. My business partner Tom uses Mint. Many folks are fans of Personal Capital. And, of course, Quicken still exists.

Although I do use Personal Capital (here are my thoughts on the pros and cons of Personal Capital), I do so primarily for its nifty retirement planner. I’m not a fan of automated money trackers, those that download and categorize info from your financial institutions. I feel like Mint and Personal Capital don’t do a great job at this. Plus, I track my spending because I want awareness. Manual data entry helps with this.

That means I want a tool like Quicken, which allows me to enter info by hand.

But even Quicken has become problematic. Are you ready for a rant? Tough. You’re going to get a rant.

For years, I used Quicken 2007 for Macintosh. I love Quicken 2007. It’s everything I could want in a money-management tool. It replicates the feel of a check ledger, which appeals to old men like me. It’s ugly, but that’s okay because it’s filled with functionality. I’ll take personality over pretty any day!

The downside? It doesn’t run on modern versions of the Macintosh operating system. To keep using it, I have to hold on to an old iMac with an old version of the OS.

Quicken 2017 is…okay. It’s certainly much prettier than the older version, and it does its job reasonably well, but that’s about the best I can say for it.

Entering transactions manually (which is how I enter transactions) is maddening. There’s no way to do this quickly. There’s a serious lack of reporting tools, and what reports do exist have limited functionality. (Want to get a net worth report for a specific date? Sorry. You can’t.)

Today, it took me nineteen minutes to enter twenty transactions into the new version. This is partly due to the crappy UI and partly because I had to track down (and fix) a couple of strange ways it handled account transfers (such as paying a credit card from a checking account). When I drove home and re-entered these same twenty transactions into Quicken 2007, it only took me six minutes and everything worked as expected without any fuss on my end.

Despite this, I had made the decision to move everything to Quicken 2017. Last October, I made the switch. Then, last week, I got this email from Quicken. 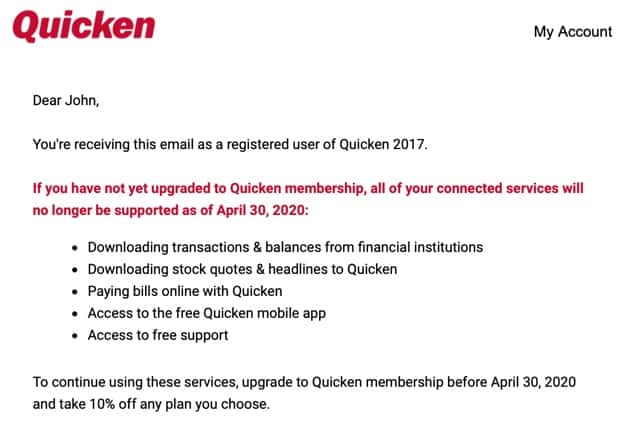 As of 30 April 2020, Quicken 2017 will no longer support downloading stock prices. In fact, all automated downloads and connections will be disabled. But hey! If you upgrade to the new version of Quicken — which is now a subscription-only product (meaning you have to pay every single frickin’ year) — you get to save 10%.

This is bullshit of the highest order.

When companies do this, it makes me livid. There’s no way in hell I’ll upgrade, and there’s no way I can in good conscience encourage you, my readers, to support Quicken if they’re going to pull this sort of bullshit.

So, I’ll be sticking with Quicken 2007. Thankfully, Quicken doesn’t have the power to disable features in that version of the program. They can’t force me to upgrade. And since it’s a superior product to 2017 anyhow, I’m okay with that. But it means I have to keep one computer on hand that I don’t upgrade to a new version of the OS.

What if you don’t have access to Quicken 2007? How should you track your spending? Here are a few possibilities:

Ultimately, it doesn’t matter which tool you choose. What matters is that you track your spending.

Expense tracking is one of the cornerstone habits of smart personal finance. Not everyone needs to do this, of course. Some folks have so much money and spend so little that expense tracking becomes unnecessary. Others are naturally hyper aware of their behavior. But for most of us, expense tracking grants keen insight into how we use our money.

The last time I complained about this, one GRS reader suggested that I create my own software tool. Honestly, that’s not a bad idea. I probably no longer possess the skills to code this myself, but I do possess the experience, knowledge, and opinions that would help me design a piece of software that could be useful and effective. Plus, I’m not motivated by greed, which I think is a bonus.

For now, I’ll continue to use Quicken 2007. It’s a small hassle to keep an old iMac around with an old version of Mac OS, but I can do it. When that computer dies, though? Well, I’m not sure what I’ll do.

Like me, my buddy John at ESI Money is a long-time Quicken user, with data going back to 1994. Like me, he enters transactions by hand. Like me, he recently tried to upgrade. Unlike me, he intends to continue using the new version of Quicken.