Yesterday, to celebrate Thanksgiving, Kim and I instituted what we hope will become an annual tradition. Yesterday, we held our first annual family meeting.

Kim approached me with the idea last week. “I think it’d be nice to sit down and talk about our goals,” she said.

“I agree,” I said. I was thinking of the article Matthias shared here in August. Matt and his wife create five-year plans to co-ordinate their shared future. They spend a day drafting couple goals to build their dream life. I’ve been thinking that Kim and I should do something similar.

So, yesterday morning over coffee, we sat down for our a family meeting. We talked about the current state of our household — and we talked about where we’d like to steer things in years to come.

“It’s been a rocky year for me,” I said, although Kim already knew this. “I’ve been fighting anxiety and depression since March. I’ve had a few patches of amazing productivity and good self-worth, but I’ve spent a lot of my time trying to keep from drowning. Metaphorically.”

“Right,” I said. I’ve been recruited by Audible and The Great Courses to create a ten-part (five-hour) series on financial independence and early retirement. “That work is going to take most of this winter. The first five lectures are due at the end of January. The rest of the course is due at the end of March. I’ll fly to D.C. in early May to record the audio.”

“Will the project pay enough to fund your lifestyle?” Kim asked.

“Sort of,” I said. “It’s four months of work, and it’ll probably end up funding about four months of expenses. That’s not bad, but it’s not great either. But I’m not really doing it for the money, you know.”

“How are your finances?” Kim asked. Believe it or not, in our nearly eight years together, we’ve only talked about money in-depth a couple of times. We trust each other, so we haven’t felt the need.

“Things aren’t as good as they were three years ago,” I said.

“What do you mean?” she asked. 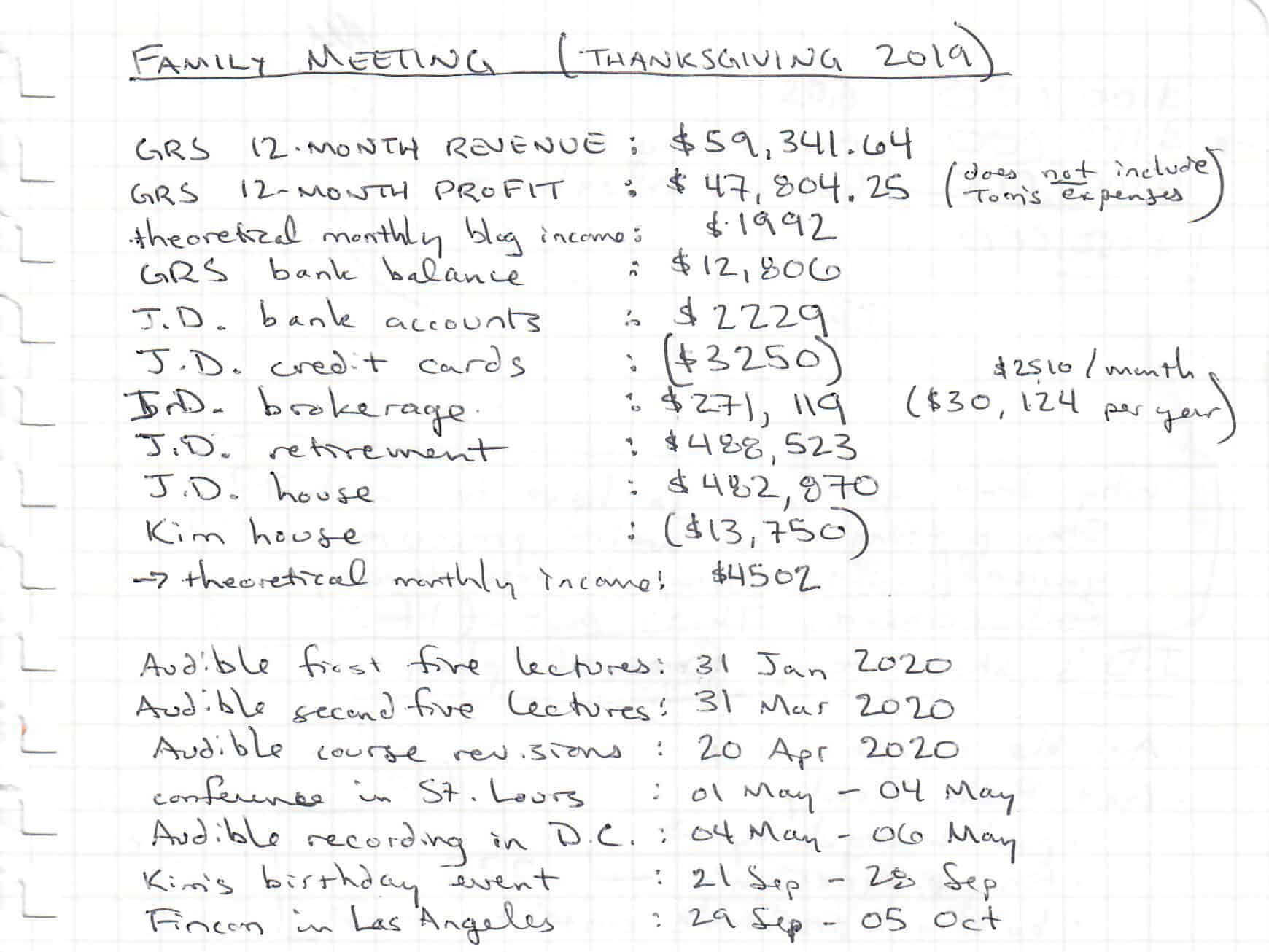 “Well, when we returned from the RV trip in June 2016, I felt completely at ease financially. I had enough saved that I never felt like I had to work again. I could do what I wanted, when I wanted.”

“Not really,” I said. “You know I’m not squandering my money, obviously, but let’s look at the numbers. Over the past three years, I’ve spent $400,000 on a bunch of big stuff: buying back Get Rich Slowly, remodeling this house, those investments in other businesses. I’m not blowing the money on gambling and hookers. These are all financial decisions that made sense in the moment, but which have left me feeling pinched.”

“Are you running out of money?” Kim asked.

“But the money you spent on Get Rich Slowly isn’t dead,” Kim said. “That gives you an income, right?”

“I haven’t taken any money out of the business yet,” I said. “It’s earning about $5000 per month in revenue. But then we have expenses. And after expenses, Tom and I share profit. But neither of us had taken any profit yet. We have about $12,500 in the business bank account.”

“What about your retirement savings?”

“That’s doing better,” I said. “I have almost exactly $500,000 in my retirement accounts. That should continue to grow over the next decade. Plus, the house is worth about half a million too, and I own that free and clear.”

“I can’t explain it,” I said. “It’s just the next nine years I worry about. And I know that the worst-case scenario is that I find work at Starbucks for a few years. My net worth is still over $1.6 million, so that’s great. It’s just bridging the gap between now and retirement that concerns me.”

“I don’t have as much as you do,” Kim said, “but I never have. I don’t know if I ever will.” She pulled up her account information on her laptop.

“I just added a fourth work day each week,” she said, “which means I’ll now be earning $5500 per month. I’m putting 22% of that into my Vanguard retirement accounts. I’ve been saving a similar amount for my new car and for other goals.”

“So, you’re saving nearly half of your income?”

“More or less,” she said. “And now I have nearly $200,000 saved for retirement. But I’ve been feeling really pinched lately. I know that’s because I’ve been saving so much, but I don’t like it. I know it’d help if I spent less. I just don’t know where all of my money goes.”

“Well, a lot of your money this year has gone to medical expenses,” I said. Kim had knee surgery at the end of March. She’s maxed her out-of-pocket expenses this year. (I have too!)

“That’s true,” Kim said. “But I still feel like I’m spending too much.”

“I was just looking at my yearly numbers in Quicken,” I said. “At the start of the year, I cut back hard on a lot of my extraneous expenses. And next year will be the last year that I buy Portland Timbers tickets, so that’ll cut even more. The biggest splurge I still carry is food. I spend a ton on food. I’ll bet you do too.”

“Maybe that’s something we should address in 2020,” Kim said. “We could find cheaper places to eat out. We could choose happy hour instead of dinner. We could drink less. Let’s work on it.”

“It’d help you with your cash flow,” I said. “And it’d make it so you didn’t have to borrow to buy the car.”

“But it’d hurt your cash flow,” she said. “Plus, I like the idea of buying into the house. I like having ownership.”

“I get it,” I said. “Just consider the idea. What are your long-term goals?”

“I really want to save for a second house,” Kim said. “I want us to buy a beach house that can double as an investment property. I’ve been talking about this ever since you and I started dating eight years ago. It’s important to me, but we haven’t done anything about it.”

Kim changed gears. She asked me about my future. “What are your plans?” she asked.

“I don’t have any specific long-term goals,” I said. “I like our life. I like our family. I like where we live. The only two concerns I have are my mental health and my financial situation until I reach retirement age.”

“You’re working on the mental health thing,” Kim said. “What can you do about the money?”

“My top priority is to increase my income,” I said. “I’ll check my spending again at the start of the year, but I’m sure it’s down from where it was twelve months ago. It’s my income that’s the issue. I have enough saved that I can draw about $2500 per month, but I’d rather not touch that money at all. I’d rather keep it for retirement.”

“So, if you want more income, how are you going to do it? You could find a job, right? Or make more from Get Rich Slowly?”

“Those are the two options,” I said. “And I don’t really want to find a job. I truly believe I can make enough with the website to support myself.”

“How are you going to do that?” Kim asked.

“I think there are three things I can do. First — and most importantly — I can publish more regularly. I don’t want to wed myself to a schedule, and that’s fine. But I think I’d be happier (and so would the readers) if I published more often than three times per month!”

“Well, Tom and I both believe that if we’d finish the redesign, that could help increase income. We’ve been working on the new site for two years. Lately, I’ve been the hold up. It’s stupid. We need to get it out there as it is, then worry about fixing things after we launch.

“And the final thing I could do to make more money is to build out profitable sections of the site. I’ve been reluctant to write certain articles because I feel like it’s ‘selling out’. But it doesn’t have to be. If I do it my way, in a way that helps the readers, it can be a win-win.”

We finished our family meeting by touching on some miscellaneous topics. We agreed not to take any major trips for a couple of years, for instance, so that we can both focus on saving money. (Instead, we’ll make excursions in and around Oregon.) And business travel killed me this year. I was miserable. I’ll do less of that over the next year or two.

In all, Kim and I spent two hours discussing our current situation and talking about the future. It was awesome. We both came away feeling energized about our plans. We didn’t find all of the answers, and that’s okay. We feel like the discussion has put us on a shared path.

After our money talk, we tackled the second part of our family meeting. We walked through the entire house — then across the entire property. As we went from room to room (and spot to spot), we drafted a list of projects for the coming year. 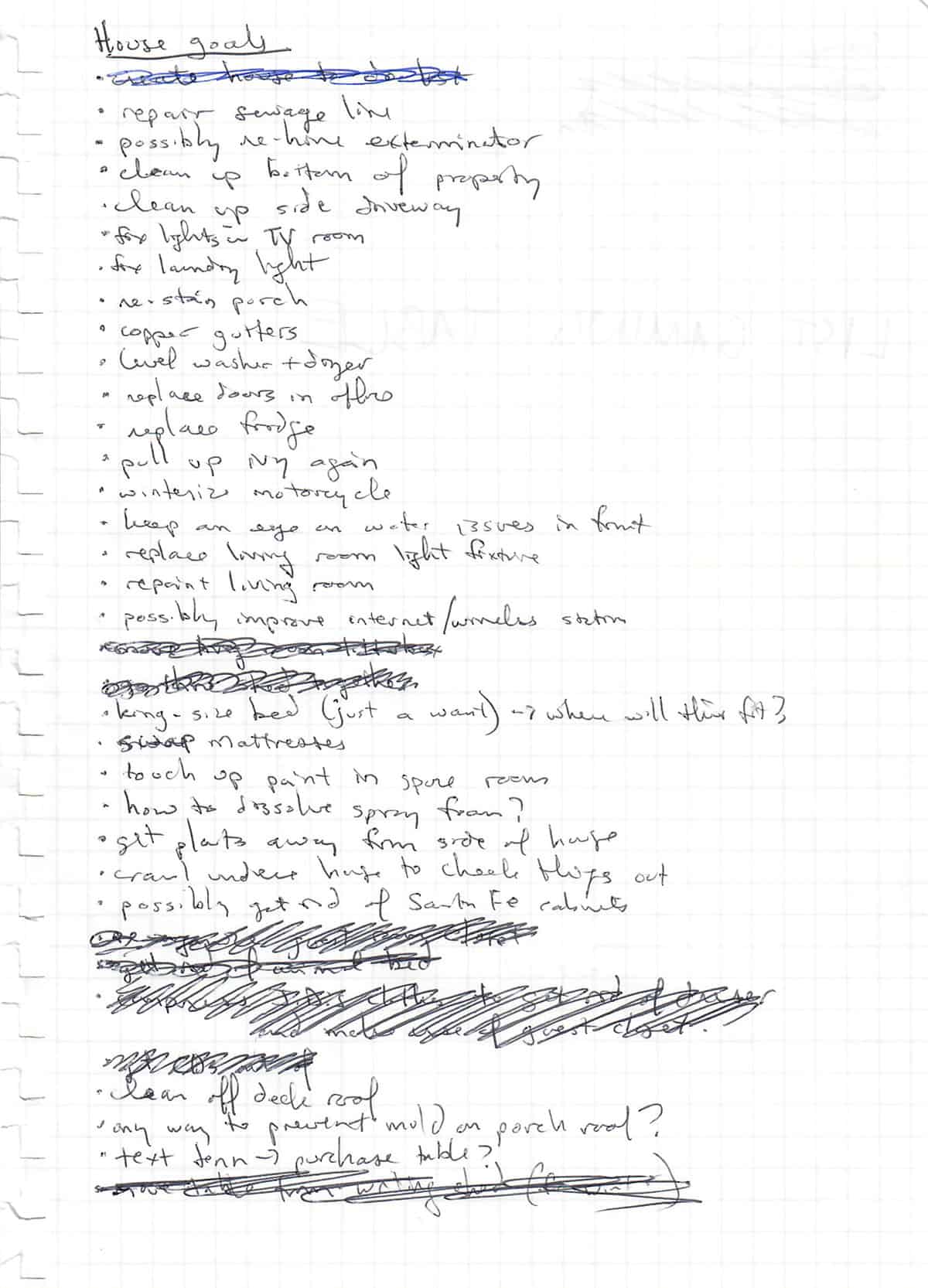 Finally, we spent the afternoon putting dreams into action. While Kim cooked Thanksgiving dinner and tackled some of the house projects, I cleaned out our storage shed, then thinned my wardrobe. (For years, I’ve been wanting to move to a more minimalist wardrobe, but keep finding reasons not to. Yesterday, I finally gave in and boxed up a bunch of clothes.)

Today, as soon as I finish this article, I’ll transfer our list of “house goals” from paper to digital. Tomorrow, we’ll test-drive a new car for Kim. In the weeks and months ahead, we’ll support each other as we work toward our individual and shared goals.

Our first annual family meeting was a success. I look forward to repeating this process again next year!